The Story of Sarah Pyke

Sarah Pyke and her sister, Eleanor ‘Ellen’ Pyke, were founder members of the Neston Female Friendly Society in 1814. Their parents were John and Mary Pyke, John was a baker. Eleanor was baptised in 1781 and Sarah (as Sally) in 1789, in Neston parish church. Sarah married John Pinnington, a local joiner, in Neston on 24 August 1815 and was on the January 1817 list of members in her married name, Sarah Pennington. She was the first Benefit Stewardess of the Neston Female Friendly Society.

John had his joiner’s yard in Pennington’s Weint and they probably lived there. Sarah and John had a son Joseph, baptised in 1821 and a daughter Sarah in 1823. Sadly the mother, Sarah, age 34, was buried on the same day her daughter was baptised and it must have been due to a difficult birth.

The young Sarah, according to a family story, was privately educated, possibly in a school in Neston. The story goes on to relate how she fell in love with Henry Houldin, a Liverpool born plumber working with her father, and against his wishes, she eloped with Henry to live with his brother’s family in Tranmere. The 1841 lists Henry and Sarah living there with his brother Thomas Houldin and his wife and their young child. Also living there is Sarah’s cousin. They are on the 1841 census there, still single, and they married in Liverpool in 1842. She was only 18 or 19, but stated she ‘was of full age’ as she had not got permission; she also stated that her father had died and this has not been proved and may have been untrue, as well! 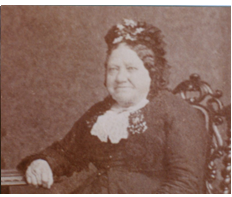 In Tranmere they had 10 children that survived birth. The Penningtons ‘cut off’ Sarah, after the elopement and her name was not to be mentioned. She had “made her bed and must lie on it”. A family tale is that a lady visited her in Tranmere, each time she had a baby, and used to leave a sovereign under her pillow and give baby clothes.

Another family story tells how Sarah came into a room in their house, when Henry was about to gamble the house away on a turn of the cards and she said “Gentlemen, this is my home and my children’s home” and shamed the other men out of it. His granddaughter, Clive’s grandmother, said she hated the sight of Grandfather Houldin, because he came for tea on a Sunday, ate all the best things on the table and the girls could not speak a word while he was in the house.

Henry was a successful plumber and they later moved to Barrow in Furness for Henry to put WCs in the shipyard workers houses. Sarah went to live in her last year with, or near a daughter near Bradford and died there in 1890, and Henry died earlier that year in Barrow in Furness.